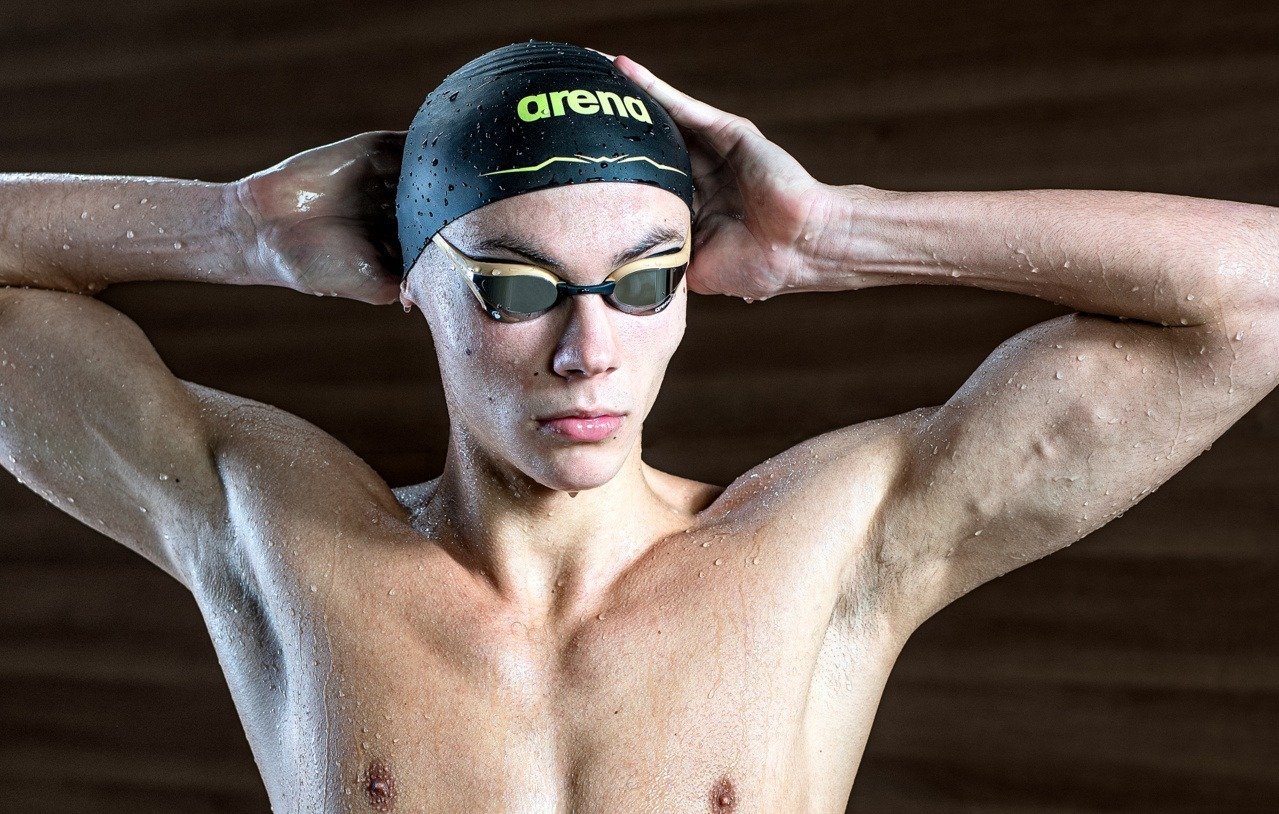 Global waterwear brand arena has signed 17-year-old Romanian freestyle sensation, David Popovici, who went into the 2020 Olympics as the fastest 100m swimmer in the world in 2021 and made the finals in both 100m and 200m in Tokyo.
In July 2021, just two weeks before the Olympics, the teenager created a major buzz in the swimming world when he broke the 100m freestyle World Junior record twice at the European Junior Championships in Rome, where he swept the 50m-100m-200m events.
“Thrilled to announce that I am now an Arena athlete,” said Popovici. “I feel that it is very important for me to be able to rely on a strong partner whenever is needed. Having Arena on my side lets me focus on my goals knowing that I have the best gear available. The future shines bright!” 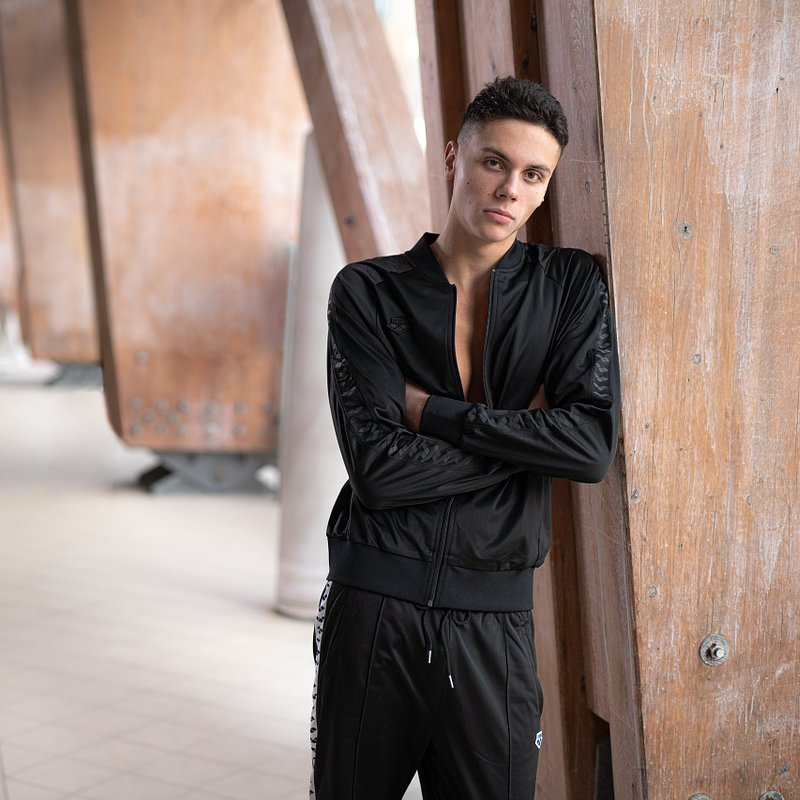 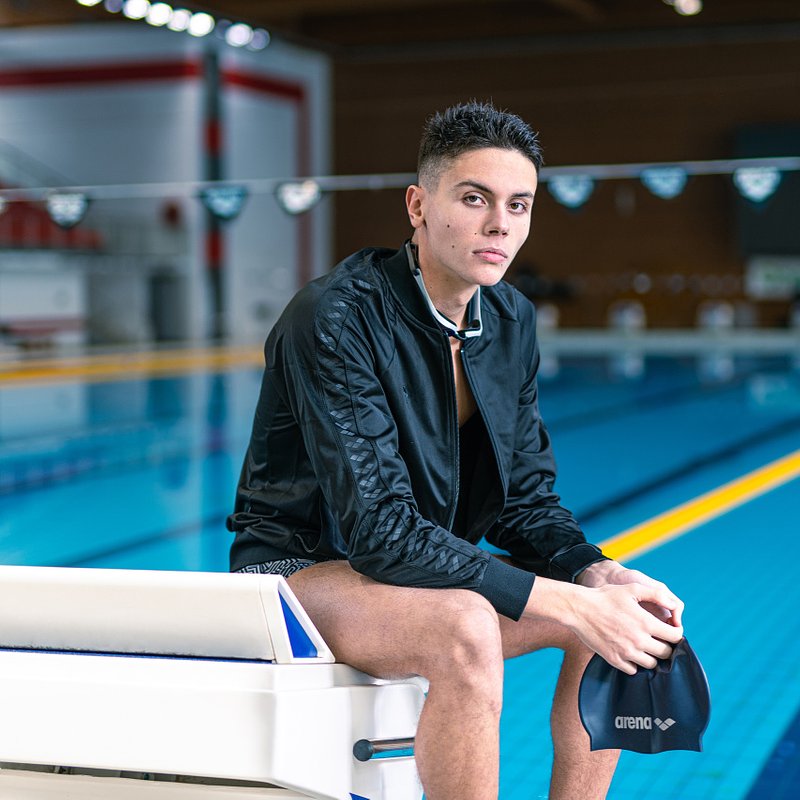 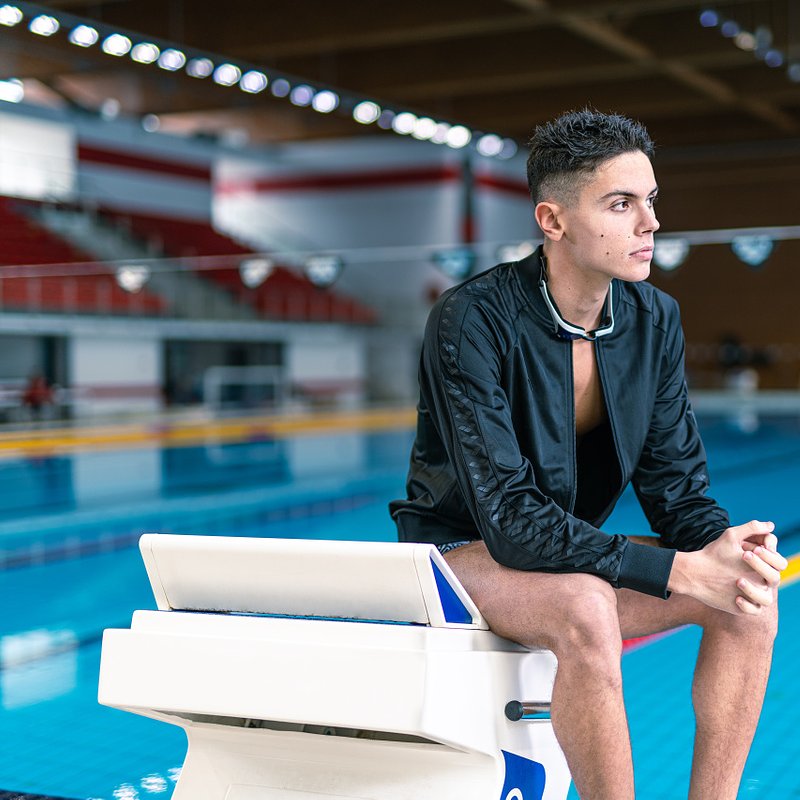 Born on 15th September 2004, in Bucharest, Popovici started swimming at the Lia Manoliu National Sports Complex as a youngster on the recommendation of an orthopaedic doctor in order to correct small deformities of his spine. Having started out under the guidance of coaches Bogdan Stroe and Bogdan Manea, he then perfected his technique with Doina Potolea. At the age of 9, he met Adrian Rădulescu, with whom he has been training ever since, returning consistently outstanding results.
After setting a series of national age group records, at the 2019 European Youth Olympic Festival in Baku he won gold in 100m freestyle and silvers in both 50m and 200 m freestyle. In 2020, he won national senior titles in the 100m & 200m freestyle and 200m IM, and in May 2021 at his first European Championships in Budapest, he set new national marks three times in 100m freestyle, and in so doing qualified for the Tokyo Olympics. While he didn’t get out of the 200m freestyle heats, he still managed to break the Romanian record. 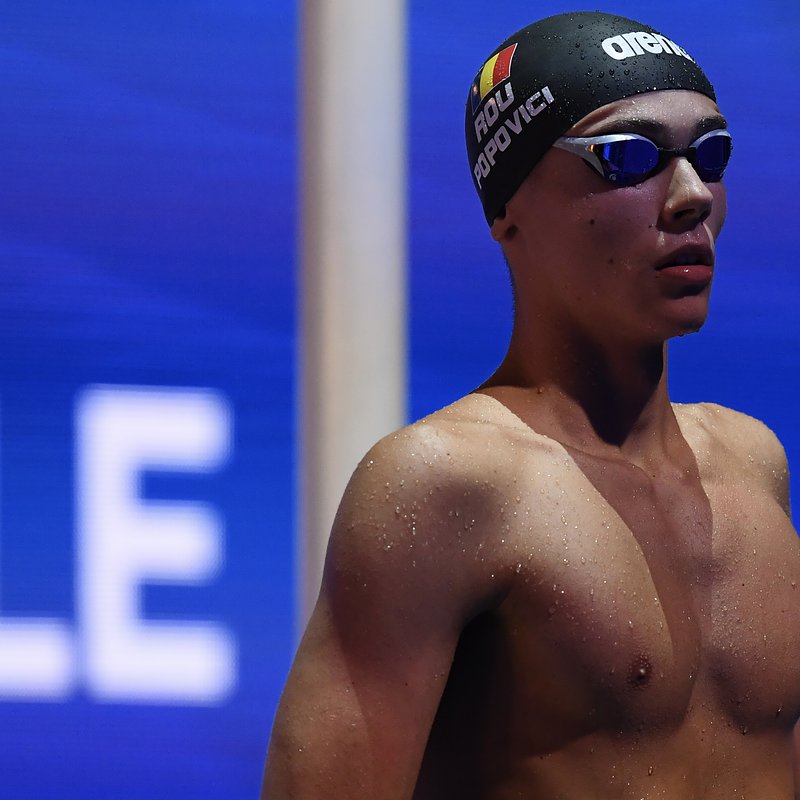 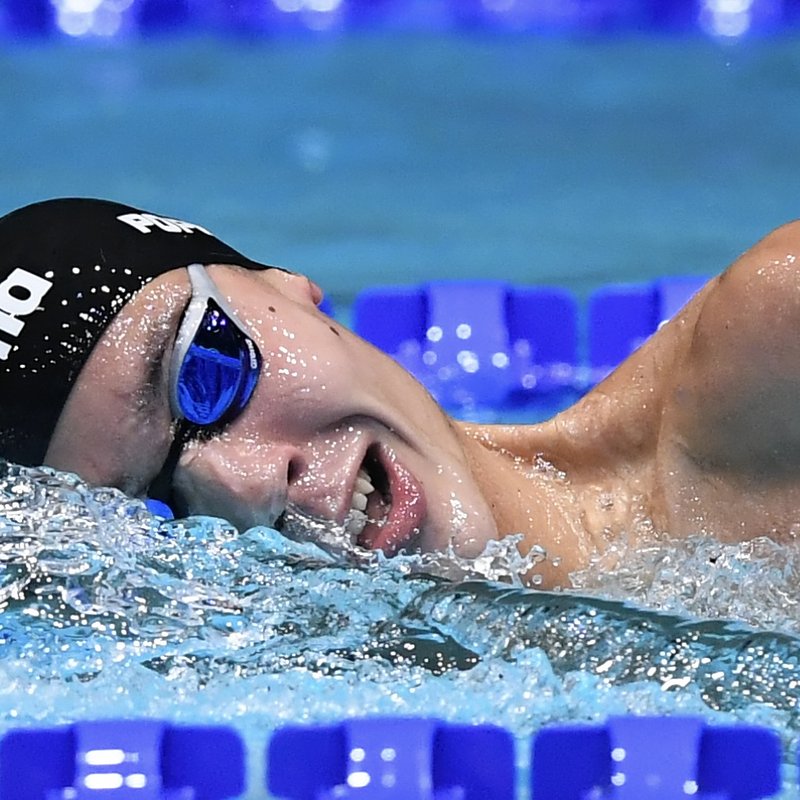 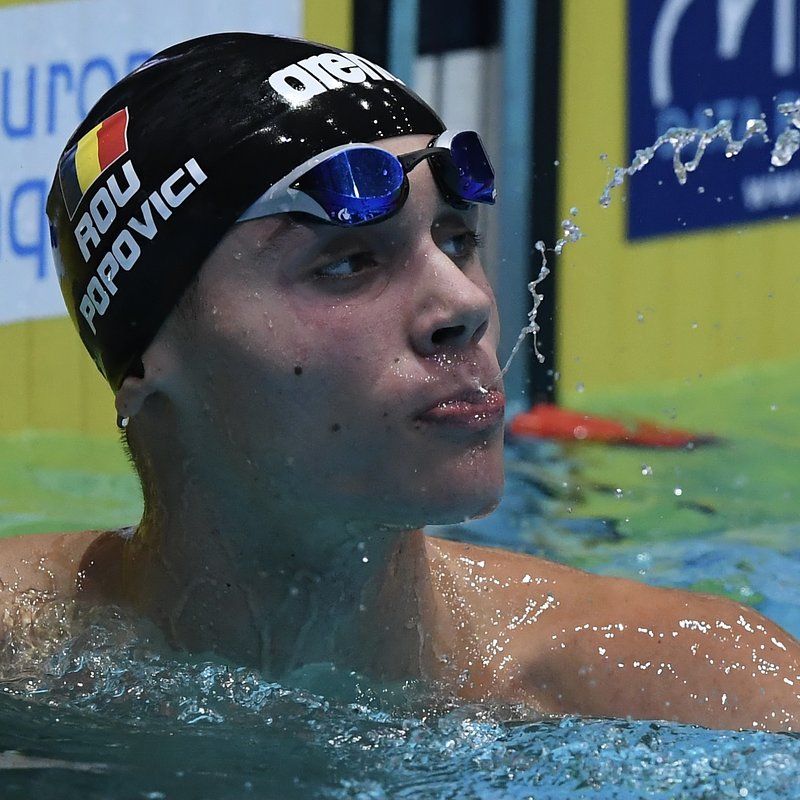 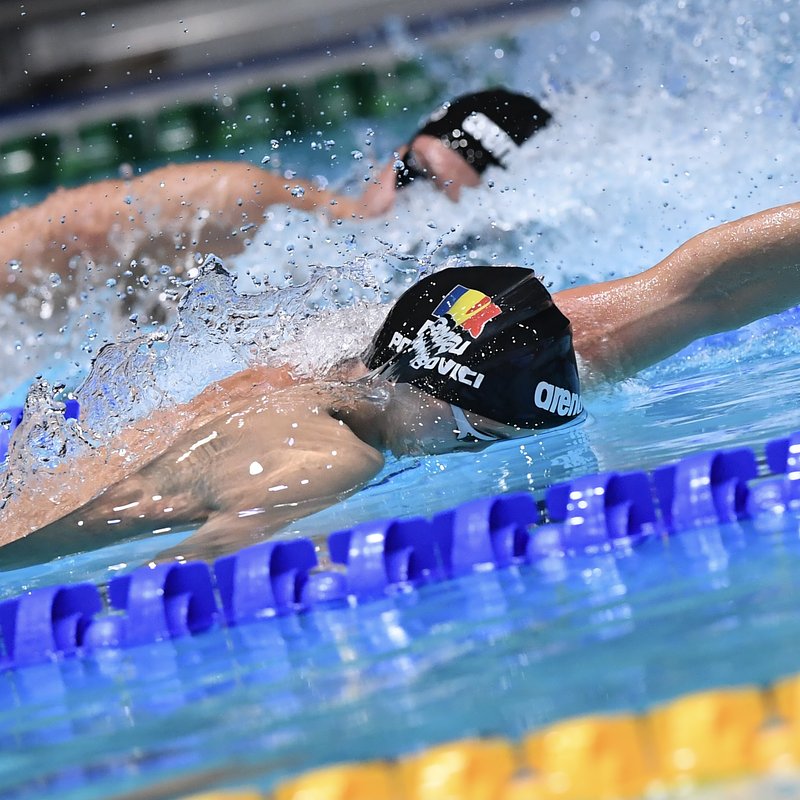 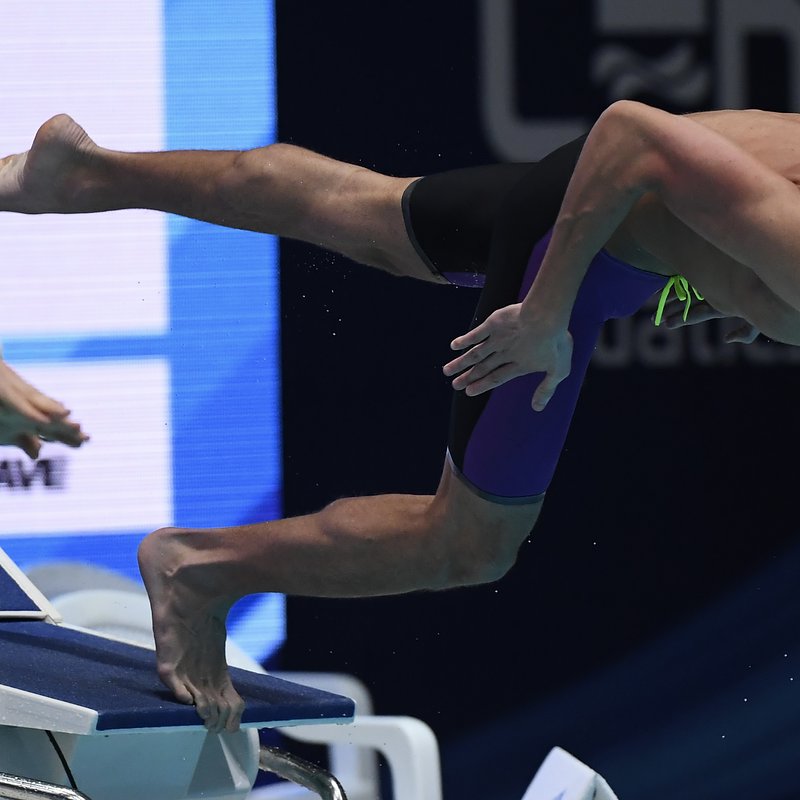 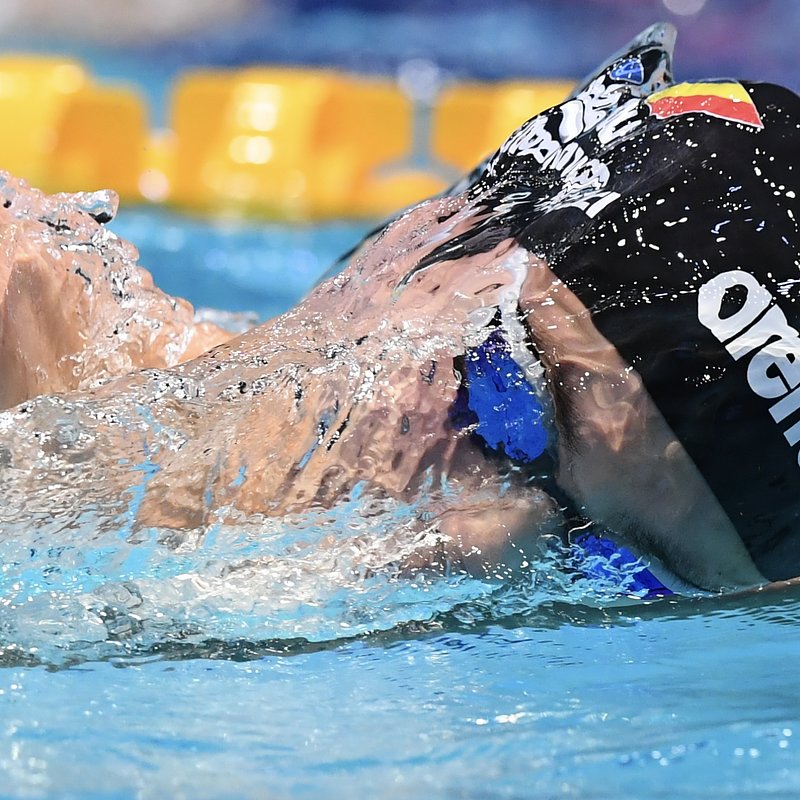 He then took it to another level in Rome at the European Junior Championships just two weeks before the Olympics, as he swept the 50-100-200m freestyle events, posting an incredible time of 47.30s in 100m freestyle, the world’s fastest time of the year and a new World Junior record. Popovici’s efforts elicited praise and encouragement from champions such as Anthony Ervin, Caeleb Dressel and Kliment Kolesnikov, and prompted the suggestion in some quarters that his style was a return to “finesse” rather than raw power in freestyle sprinting.
Starting out with the 200m freestyle in Tokyo, he made it through to the final, missing out on the bronze medal by 0.02s with a personal best time of 1:44.68, setting new Romanian and European Junior records in the process. In the 100m freestyle, he qualified for the final, finishing seventh.
In November Popovici switched to the 25m pool for his first European Short Course Championships in Kazan, Russia, where he won his first major international title with the 200m freestyle gold in 1:42.12. After a measured start he worked his way methodically through field before taking the lead for the first time on the final lap, recording a 3rd consecutive personal best, and also breaking the Romanian national record.
After a season of explosive growth that has elevated him to the upper echelons of his sport, Popovici now seems destined to achieve great things. He hopes to finish off 2021 on a high at the World Short Course Championships from 16th-21st December in Abu Dhabi, where he will swim the 200m and 400m freestyle.
Major events on his horizon for 2022 include: the World Championships in Fukuoka, Japan, from 13th-29th May; the European Junior Championships in Otopeni, Romania in July 2022; and the European Championships in Rome from 11th-17th August.
“We’re obviously very excited that David will be joining our Elite Team,” said arena Deputy CEO, Giuseppe Musciacchio. “He’s doing things as a 17-year-old that today’s champions weren’t getting close to, so we’re thrilled to be part of the support group that will help to nurture him carefully so that he matures at the right pace to fully realize his unique talent. His signing builds on the positive collaboration we already have with the Romanian Swimming Federation, and we are really looking forward to supporting him and his compatriots to greater successes in the pool, and to leveraging this success to further promote swimming as a positive lifestyle in our European partner countries.”
David Popovici
Born: 15/09/2004, Bucharest, Romania
Age at first Olympics (2021): 16 years, 315 days
credit photo: courtesy by arena

arena is pleased to announce the renewal of its partnership with Dutch open water swimmer, Sharon Van Rouwendaal. The 28-year-old 2016 Olympic open water champion and 2020 runner-up is now contracted with the Italian waterwear brand through 2024, including the Summer Oly...

arena is pleased to announce the renewal of its partnership with 4-time Olympic medallist and 4-time World champion, Florent Manaudou. The 31-year-old Frenchman’s new contract runs through 2024 and includes the Summer Olympics in Paris.

arena is pleased to announce the renewal of its partnership with Olympic and World butterfly champion, Kristóf Milák. The 21-year-old Hungarian’s new contract runs through 2024 and includes the Summer Olympics in Paris.