The most advanced, sophisticated racing suit arena has ever designed

This feature is delivered by two new advances, Hydroglide fabric and the Carbon Extreme Cage, which combine lightness and compression to deliver the ultimate experience in racing performance.Adam PeatyCovering the front and lower back, the ultralight, low-profile Hydroglide is smooth to the touch, giving it incredible glide and speed, while also reducing drag and turbulence in critical zones.Covering the legs and lower torso, the similarly ultralight, low-drag Carbon Extreme Cage has carbon fibres woven into the fabric in a tight grid-like pattern surrounding specific muscle groups, providing exceptional muscle support and improved body hold to enhance performance without restricting mobility. The result is added stroke power and stability with optimum durability, flexibility, and efficiency.The suit also employs a unique taping structure, with carbon strategically infused into the woven lining to activate major muscle groups, thereby enhancing the swimmer’s feeling of support and body hold.Several of arena’s Elite Team of champions were involved in the testing of the new Carbon Glide, and their feedback was uniformly positive after trying out the suit:2012 double Olympic champion Ranomi Kromowdjojo (Netherlands): “This suit is beautiful. It has excellent compression over and all around the legs. The construction around the torso feels like it’s pushing me up and forward. I just know that the suit is fast!”2016 triple Olympic champion Katinka Hosszú (Hungary): “It’s amazing underwater!”2016 double Olympic bronze medallist Gabriele Detti (Italy): “It’s a cracker!”2018 European champion Margherita Panziera (Italy): “I love the way the water slides down the front.”2019 World silver medallist Bruno Fratus (Brazil): “This suit floats! The fabric over the legs is so light but I feel safe and strong because of the carbon fibre. It’s the best suit that arena has ever made!”2016 Olympic champion Sarah Sjöström (Sweden): “The suit helped me to have an easier and quicker kicking reaction.”Discover the arena Powerskin Carbon Glide 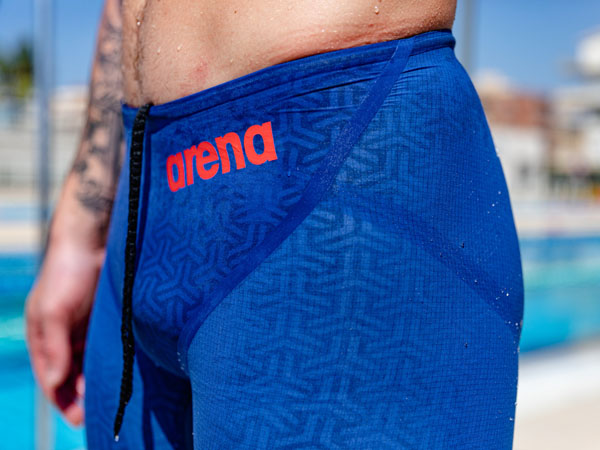